Connecting & Enriching the Community through Gardening & the Arts

A new garden has come to Ninos Parkway

This year, the Natomas Garden & Arts Club received funding from a SMUD Shine Award to create 1/4 acre of pollinator habitat along Ninos Parkway in the South Natomas area of Sacramento.  This new garden has been created with support from the SMUD Shine Program, Sacramento Valley California Native Plant Society, MiridaeLabs, Natomas Rotary Club, Councilman Jeff Harris and the Xerces Society! The new “Grassland Garden”, located near Rio Tierra Jr High School, will feature drought-tolerant native plants that can be found in California’s native grasslands.  The Grassland Garden will provide vital habitat for monarch butterflies and other pollinators, as well as birds and other wildlife.  Many of the plants were chosen because they are valuable to pollinators and other wildlife. For example, the garden contains two species of milkweed, the plant that monarch caterpillars need to feed on to mature into adults. 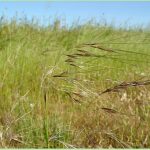 Purple Needle Grass
California’s native grasslands are teeming with life—birds, mammals, reptiles, insects, and other animals depend on grasslands. Grassland ecosystems consist of grasses, grass-like plants, shrubs, and forbs, and support about 40% of California’s native plant species. Development, agriculture, and invasion by exotic species have reduced California native grasslands by 99%. Grasslands are important for carbon sequestration, flood reduction, erosion prevention, and food production.
The Grassland Garden will have many other benefits. It will provide an outdoor class space for nearby schools and enhance the appearance of the parkway, creating a beautiful place for community members to walk and exercise.
We believe that people will enjoy the Grassland Garden and we would love to have the community involved in this project.  To that end, the Natomas Garden & Arts Club organized a volunteer planting day for the Grassland Garden on Dec 2, 2022. See video recorded that day.
Now that the baby plants are in the ground, the NGAC will be organizing periodic volunteer activity dates and can use your help!

Garden workdays will be held on the third Saturday of the month from 9:00am – 11:00am. Please join us in the garden!  Come help us in the new garden while learning more about pollinators and pollinator-friendly landscaping. We hope to see you there! If you would like to volunteer, please email us at natomasgardenartsclub@gmail.com for more information.

Your participation in NGAC neighborhood projects continues to demonstrate commitment to the community and investment in our future. We appreciate your involvement and couldn’t do it without you! If you would like to stay informed of future community projects, just click here natomasgardenartsclub@gmail.com to request your name and email be added to our announcements list.

Translate this page in your preferred language:

You can translate the content of this page by selecting a language in the select box.